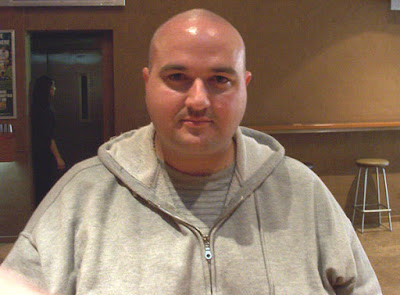 No one has a bad word to say about Leslie Nassar, now that he is dead. (See Helen Razer at Crikey for a more traditional obituary.) He is a man made famous for saying bad words about other people, so this is unusual. Those who were lucky enough to know him, work with him or follow him on social media through his long and storied career know that when he cut you, it's because you deserved to be cut. For everyone else, the word I'm seeing most often to describe him and how he acted towards others is "lovely", which brings to mind the way Paul McDermott calls someone a "lovely feller" in a soft voice, like he's reciting The Sentimental Bloke. That is perfect.

I got to know him in the year 2001, when I joined the community of an epochal computer games forum called PlanetCrap. He went by the nickname of szcx back then, IIRC because he preferred those keys to the usual wasd configuration when playing shooter games with a keyboard. Most of the denizens of that forum were European or American, with szcx and I just about the only regular Aussies. I first met him in 2002, which is where I took the above picture. In that community, he was always an intelligent and nice influence, but could take the fight up to trolls and villains as much as anyone when the need arose.

Even back then Leslie was liable to get into trouble. He went to Portland, Oregon for work on a visa sponsored by his employer, but went over the border to Canada to try to renew it after his employer lied to him about his status... only for the Canadian authorities to dob him in to the US Department of Homeland Security for overstaying his visa, and get him shipped to a detention centre in Seattle. After three weeks of incarceration and what amounted to torture, he was deported to Sydney. Hopes that he might emigrate to the US to join his American partner were dashed for a long time.

As a man to meet and talk to, you wouldn't meet a more agreeable conversationalist. He was always interested in what you were doing, empathetic to your life's trials and tribulations, and obviously had a mind as quick as the latest computer chip, and sharp as the blades he shaved his head with. He was very well connected, though of course later he burned some of those bridges with the @fakeStephenConroy controversy that saw him gain his first taste of instant public notoriety but then get blackballed nearly out of the digital industry when certain Telstra executives held a grudge against him. Thankfully, he landed on his feet with a contract with Victoria Police, which meant he had to move down to Melbourne where he lived a stone's throw from my place in Brunswick. 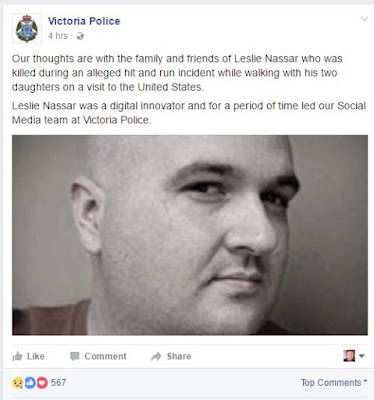 We hung out more in those times. By that stage his first daughter had arrived, who turned out to have a one-in-a-million syndrome similar in some ways to Downs, meaning his family needed lots of quality medical help which at the time would have been outrageously expensive in America in the pre-Obamacare era. Even if he could get a visa and/or citizenship, the cost of supporting his child made the thought of moving to America out of reach.

America's loss was Australia's gain. Many other people know more about his work at the ABC setting up podcasting, at Q&A with TweeVee TV and the viral sensation that was @DeptOfAustralia and I'm sure that history will be well documented elsewhere. I knew him by that point as a friend and business mentor, at a time when I really needed both. As such, he was a constant source of positivity and a perfect foil for radical ideas, even when his own family was under threat from external forces and the danger of his professional radicalism was so present in his personal life. His fearlessness was not false bravado. He could speak with authority on how to construct a life as an anti-Telstra tech terrorist, something I shared with him in my business.

Leslie's death hits me particularly hard because he was a fellow traveller in life. He is the same age as me, and we both built young families later in life after long periods as lone wolves. I only wish I was nearly as talented has he was, in both a technological and comedic sense. I am only pretending to be an ubergeek, really, and when I try to run some of the same sort of funny material as he does, I tend to come off as a nasty smartarse whereas he could always make it sound like it was from the heart (because it was). He may have been a boy from the working class suburbs of Adelaide, but he always had more class than most of the rest of us put together.

It sounds like Leslie's latest project, Wrangling Cats, was more of a lifestyle business. He had finally got to move back to America, in Idaho where his in-laws lived, and it seemed like he had figured out his life and what made him happy and secure. That is what makes it all the more tragic, that his life was taken away so senselessly by a 20-year-old kid driving home drunk on a Saturday morning (whose life has also been ruined now, BTW). There were more than 30,000 road deaths in America last year, about 10 deaths per 100,000 of population. The equivalent figure for Victoria, where we have spent so much energy minimising deaths like these, is around 3.5 per 100,000. Leslie had so much more to give, primarily as a father and husband. What a waste of human potential.

He is survived by his wife and three daughters of eight, three and one years. If you would like to donate to a fund for his family, his most recent business partner set up a GoFundMe page. It's the least any of us can do.
Posted by Paul Montgomery at 3:01 PM 1 comment: