In the place of a Dark Lord you would have a Queen! 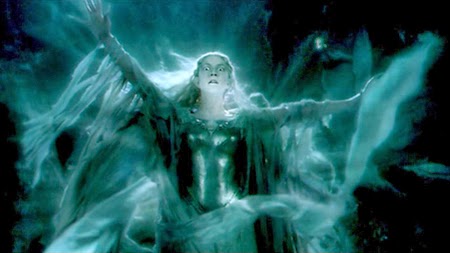 The American left has reacted to recent opinion polls depicting Hillary Clinton as the unchallenged successor to Barack Obama - unassailed by credible opponents on left or right - with ambivalence, as in this rumination by Booman Tribune or this conflicted conversation at Balloon Juice.

The argument goes like this: we know Hillary has astoundingly good numbers across all demographics and would walk into the White House with control over both houses on Congress if they hold up, but we all flocked to Obama last time because she wasn't left enough for us, especially on foreign relations (i.e. she's a hawk), and we're apprehensive of the desperate mudslinging that will result from GOP reactionaries faced with their worst nightmare. The left would all love for another Obama to rise up from relative obscurity and save them from the terrifying prospect of Galadriel, um I mean Hillary with the full power of the One Ring, um I mean the Red Button.

The closest analogue to a Frodo who would shoulder that burden is Maryland governor Martin O'Malley, who appears to be the Moneyball candidate with much talk of his Nate Silver-like reliance on stats and deep analysis. Elizabeth Warren isn't running, the one person who was most Obama-like among a fairly weak set of contenders. O'Malley as VP would be interesting, as it would give the left something to hold onto for a succession plan.

No, it looks like America is going to have to come to terms with Obama trudging off to the White Ships as Hillary ascends the throne, and the left suspects they are not going to like the "all shall love me and despair" bit all that much. It's not that Galadriel with the One Ring would have been evil, per se, just that living in a country with a Lawful Neutral monarch is not much fun. Though it would be cool if she developed those blue wavy CGI effects to liven up the Correspondents Dinner.
Posted by Paul Montgomery at 1:30 PM