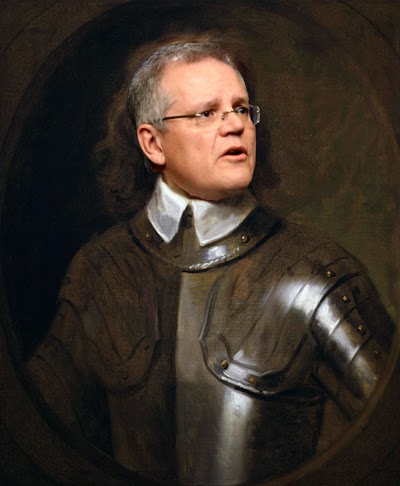 Not only is it now inevitable that the Libs bone Tony Abbott - there is no coming back from here, as the Prince Phillip disaster was followed by a Press Club speech basically telling the party room that he was never going to change so you can take the keys to Kirribilly out of his cold, dead fingers - there will be a spill presently which will be the first of several, so the process is drawn out as painfully as possible. There are only 30 or so of the 102-strong caucus who would vote against Abbott, so he will most likely win if Warren Entsch goes ahead with his plan to cause a spill.

Morrison knows what's coming, mainly because he saw it with his own eyes when Labor went through it not that long ago. He knows the Abbott coalition-within-the-coalition is still the largest voting base in the party room, which is why he is on Abbott's side working the numbers and acting as Team Tony's front man for the media. He will be able to point to his superior loyalty after he eventually wins the one that matters, drawing a sharp distinction between himself and those tarred with the Tone Def brush.

Scott Morrison is the answer for which many on the right yearn. The question being asked by the faceless men is, "who will satisfy the Liberal party room and its base, without bringing unworkable baggage?" Everyone else conceivably in the running has too many faults. Bishop is a lightweight, Turnbull is not ideologically acceptable, Hockey is a beaten man.

Liberal voters love an authoritarian who dominates on their behalf. Morrison will frighten some horses with his cromulent Cromwell impression, but as long as they are mostly millennials and/or leftists, that's perfectly fine from the perspective of the blue rinse set.
Posted by Paul Montgomery at 10:03 PM